I love capturing beautiful nightscape photography, and I’m always happy to share what I know and what I learn. I’m keen to inspire others to head outside and look up at the sky, and to photograph the sky.

So I’ve started a series of posts with the theme ‘Nightscape Photography 101‘ – sharing tips and tricks to help you take better nightscape photos.

In this first post, I’m going to explain what nightscapes actually are, and how they differ from what would be considered ‘Astrophotography’ or normal ‘Landscape Photography’. I’ll also explain the different types of Nightscapes, and talk about the Technology enablers that have changed the game in the last few years.

Nightscape Photography 101: What are Nightscapes?

Nightscapes is a relatively new genre of photography, combining beautiful foregrounds with a night sky scene – often in a single exposure, sometimes as a composite of varying exposures.

They’re also referred to as:

The key feature is that it combines land and sky, and of course the prerequisite is that it’s taken at night (or twilight) – otherwise it’s just landscape photography 🙂

Nowadays, there’s brilliant nightscape photographers, just as there are brilliant deep space photographers and solar system photographers. The equipment, techniques for capture and processing are different for each, too.

Taking great hi-res pictures of the Moon or Planets requires a big, heavy, expensive tracking mount with a long focal length telescope (reflecting telescope or SCT usually). In most cases, the camera is a purpose-built colour or monochrome solar system astrophotography camera such as the DMK series by Astronomy Cameras, or Flea series by Pt Grey Research.

The photo above is the gear I use to capture high-resolution solar system images. It’s a 12″ Newtonian on an EQ6, with a DMK camera.

Taking beautiful, deep images of galaxies, nebula and star clusters in deep space requires a big, heavy, expensive tracking mount with a refracting or reflecting telescope. Cameras include standard DSLR’s, but also cooled and modified DSLR’s or cooled purpose-built colour or monochrome astrophotography cameras such as cameras by FLI, Apogee and QHY.

The photo above was my deep-space imaging gear, consisting of an ED80 refractor, with a 400mm guide scope on the same EQ6 with a bunch of other bits and pieces, reducers, etc. I used a Canon 350D/20D when I was actively doing deep-space work (3 years ago). It’s very modest compared to the guys that do it really well, especially for today’s standards.

The great thing about nightscape photography, is that it often requires nothing more than a fixed tripod, a Digital SLR and a widefield lens. Like all forms of photography, there’s certainly extra bits and pieces you will want and need, but it can certainly be very low-tech; simple to setup and get going.

The beauty of nightscapes is that even within that genre, there’s so much variation in the types of photos you can capture – and they’re all possible with just a tripod, Digital SLR and lens.

Photos taken just before sunrise or just after sunset, usually featuring the Moon and/or Planets to give the astronomical interest. Capturing conjunctions of the Moon and Planets (when they are close together in the twilight sky) are always popular.

Star Trails capture the rotation of the earth while the camera keeps exposing, creating streaks of light where bright stars are. They can capture trails as short as a few minutes, up to many hours – creating long streaks and swirls.

Capturing a star trails image can be done with multiple short exposures combined later in software, or a single long exposure with the shutter left open. There are pros and cons to each, which will be discussed in a future ‘How to capture star trails’ post.

This type of photo is what you would call the ‘typical’ nightscape – consisting of a landscape scene with a night sky scene. The night sky could be a simple star field, or could involve the Milky Way or other bright objects like the Moon or Planets.

Exposures are typically short (under 30 seconds) so the stars don’t appear as trails, but rather as points of light. They’re usually captured with a widefield lens (24mm and under) but not in every case (it depends on the foreground).

Timelapses are basically a sequence of Night Sky shots made into a movie. They can depict the stars moving overhead, rising or settings over the course of a night, can transition from day into night, and longer timelapses consist of multiple sequences captured at different times.

There’s more advanced techniques during capture (such as panning and movement) as well as during processing (growing star trails, comet star trails etc) that can make timelapses more unique, and they’ll be covered in a separate post.

The last sub-type of Nightscape i’ve called ‘Longer Focal Length’,  where it usually involves the Moon as a background with a landscape scene in the foreground. With a longer telephoto lens, and with the right positioning of yourself compared to the foreground scene or object, the photo can give the “Moon Illusion” where the Moon appears huge compared to how we normally see it in nightscapes. 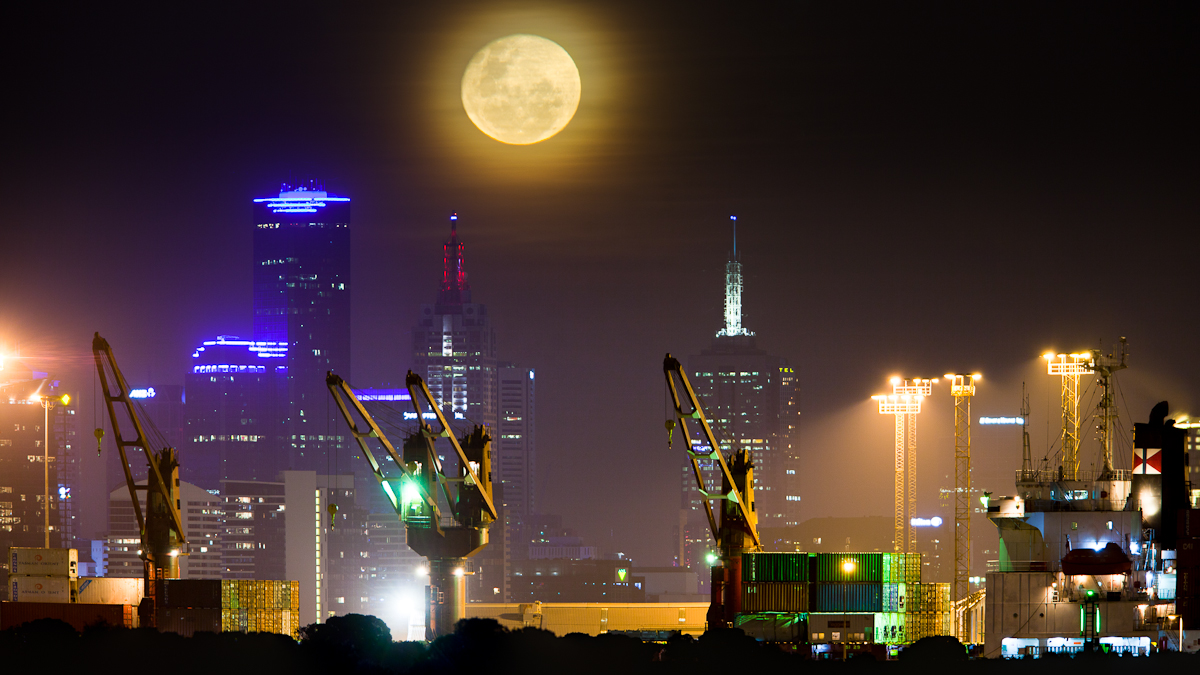 One of the main reasons for the growing popularity of nightscape photography, is that it’s simple more achievable now than it was in the past. Certain scenes combining foreground and sky (such as the milky way) simply wasn’t possible many years ago without having tracking mounts to do longer exposures of the sky to get the star/milky way detail, but at the sacrifice of the foreground.

You could do long exposures on film to get star trails, but you simply couldn’t do short exposures to freeze the stars and still capture the amount of light and detail that you can now. Today’s DSLR’s are so sensitive, you can capture detail in the Milky Way in 30 seconds or less!

Unedited 30s exposure at ISO6400 with the Canon 6D

The image above is an unedited shot of the Milky Way over Forresters Beach, captured in a single 30 second exposure @ ISO6400 with a Samyang 14mm f/2.8 lens. Unedited! No noise reduction, no increase in exposure, contrast, saturation. Shots like this simply weren’t possible with the technology available even just a few years ago.

Small, portable tracking devices have come onto the market in the last 18-24 months. There’s always been ‘small’ equatorial mounts but they’ve been designed more for small telescopes and not for cameras. These devices are extremely portable, fit on top of a normal camera tripod, run off AA batteries and they’re affordable (under $500)!

Some examples are the Vixen Polarie, Astrotrac and iOptron SkyTracker.

You align them like an equatorial mount – make sure it’s facing north/south, tilt it to set your latitude, but once aligned (usually taking only a minute), you can then capture longer, deeper exposures without star trails. The foreground will start getting blurred as its tracking, but that may be acceptable depending on your scene. You can also capture two images (one with tracking on, one with it off) and combine them in software later. You can also turn them on their side and use them for panning while shooting timelapses.

They just increase your ability to be creative with your nightscapes. Their portability and affordability is what makes them unique – they’ve really changed the game for nightscape photography.

I hope that explains and helps you understand what a Nightscape is. In the coming posts, we’ll talk about everything you ever wanted to know about nightscapes, including:

Please feel free to ask questions in the comments section below. Let me know your challenges and frustrations and questions about nightscape photography, and I’ll add them to the list of topics I’ll cover!

Make sure you don’t miss any posts in this Nightscape Photography 101 series!

I hope you will enjoy this series and your feedback and comments will always be welcome. Please share with your friends too!

Mike Salway lives on the Central Coast of NSW, Australia and loves Photography, Amateur Astronomy, CrossFit and Karate. He co-founded the amateur astronomy website, IceInSpace, has a family with a wife and 3 kids, is a 2nd Dan Black Belt in Karate and loves keeping fit with CrossFit. In real life, Mike is a Senior Product Manager for a software company. View more about Mike.
View all posts by Mike Salway →

My name is Mike Salway and I'm passionate about photography, amateur astronomy, CrossFit and Karate. I love to capture beautiful landscapes and night sky scenes, and love it when I can show people the wonder of our universe.

My name is Mike Salway and I'm passionate about amateur astronomy, photography and karate. I love to capture beautiful landscapes and night sky scenes, and love it when I can show people the wonder of our universe